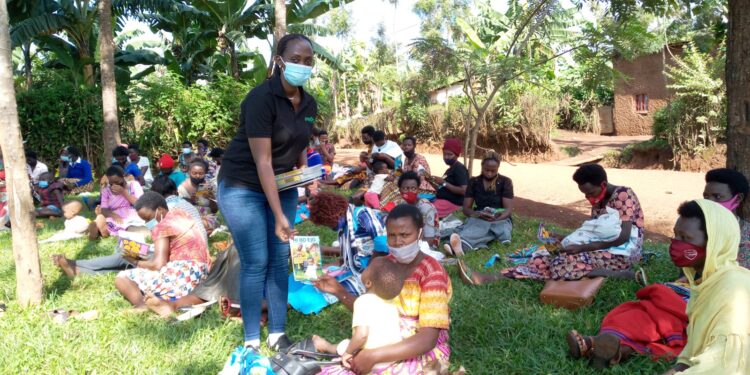 Akurane Itoto campaign was on Wednesday, March 17, launched countrywide to raise awareness on immunization and nutrition for the children of teen mothers for a period of 15 days.

This is a campaign organized by Girl Effect Rwanda, the brand that established the Ni Nyampinga program.

In districts of Rwamagana and Gatsibo, Girl Effect Rwanda’s campaign will be reaching out to teen mothers who are originally beneficiaries of Empower Rwanda, an organization supporting teen mothers and vulnerable women in the two Eastern Province districts.

According to Olivia Promise Kabatesi, the founder and Country Director of Empower Rwanda, research was conducted in seven districts by Girl Effect Rwanda and findings showed gaps in terms of immunization and nutrition, specifically for the children of teen mothers.

This is due to the fact that this is a category of people who are most vulnerable and may not be able to get all nutritious food and knowledge regarding immunization, and all the support that it may require, she stated.

“In that research by Girl Effect Rwanda, it was identified that most of the teen mothers and their children had not got the vaccines; so we launched a campaign to raise awareness, to inform the teen moms what they should do,” she explained, adding that they also teach sexual and reproductive health and rights during this campaign.

During this campaign, mini magazines will be distributed to the teen mothers, sharing stories regarding nutrition and immunization in order to learn from each other.

In this mini-magazine (NIBO EJO) by Girl Effect Rwanda, there are success stories for teen mothers who once suffered but through the empowerment interventions, they have been able to become economically self-reliant and have raised their kids without depending on men.

These success stories are aimed at encouraging the current teen mothers, build their confidence in life, and work hard to become self-reliant.

“The campaign aims at increasing the knowledge for the girls, to understand that they are mothers, much as they are not married, they are mothers, they have a role to play in the growth of their children, they need to understand what they should be doing in the area of nutrition, what does a child require, from which age to which age, what should they be feeding on, what do they have in order to avoid malnutrition,” Kabatesi explained.

Kabatesi also said this kind of information is available at health centers, encouraging the teen mothers to normalize regular visits to the health facilities for advice. She also encourages them to use contraceptives, clarifying that abstinence sometimes becomes almost impossible for teen mothers who had experienced sexual intercourse, pointing out that the contraceptives could prevent unwanted pregnancies.

Kabatesi explained teen mothers face particular challenges, which might affect their participation in immunization and good nutrition; the reasons include the fact that some are abandoned.

“Basically, they are young, they lack knowledge, there is lack of family support and lack of support from people who impregnated them; all those combined make them vulnerable and unaware of the importance of immunization,” she noted.

The Empower Rwanda official insisted that despite the beneficiaries’ vulnerabilities, the campaign will raise awareness on the importance of the kitchen garden and the use of available land to grow nutritious food that could help in the prevention of malnutrition for the children; as the organization also encourages saving culture and fighting poverty.

Divine Mukantambara, a teen mother from Kabingo Village, Rweru Cell, Munyaga Sector in Rwamagana, has a three-year-old child, her life depends on working in other people’s farms; she said she does her best to prepare a nutritious meal for her child, mostly using milk, beans, and vegetables, among others.

“We used to go to the health center to immunize the children, then they told us how to give balanced nutrition to our children. I may not be able to find a rich meal but I do it as much as I can, the parents I live with do their best to help me,” she said.

“Men nowadays.. when you go to ask support from him, he wants to sleep with you again, but as an adult, you say, I made this mistake once, but I cannot make the same mistake ever again, I will try my best to do it on my own, but my child will not lack good food. It is not easy but I try my best,” she discussed.

Her neighbor Sylvia Mukantambara said that being with others in an informal saving group gives her relief from what she went through as a teen mother, she noted that while she may not afford some expensive, she is ready to learn a new approach she can use her small capacity for her child not to suffer from malnutrition.

Empower Rwanda, the organization founded in 2019 supports 120 and 300 beneficiaries in Rwamagana and Gatsibo districts, respectively. In Rwamagana, its beneficiaries are from both Munyaga and Fumbwe sectors.

Girl Effect Rwanda’s mission is to enable all of Rwanda’s one million adolescent girls (aged 10-19) to fulfill their potential. They work across four areas: partnering with leaders to deliver for girls; developing innovations in girl programming; working through their brand platform Ni Nyampinga to inspire and enable girls, and generating girl-led insights and evidence. Their work aims to encourage investments that will benefit Rwandan girls – in systems, culture, government, and industry. 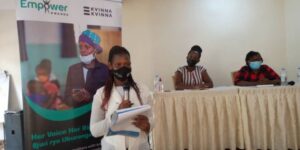