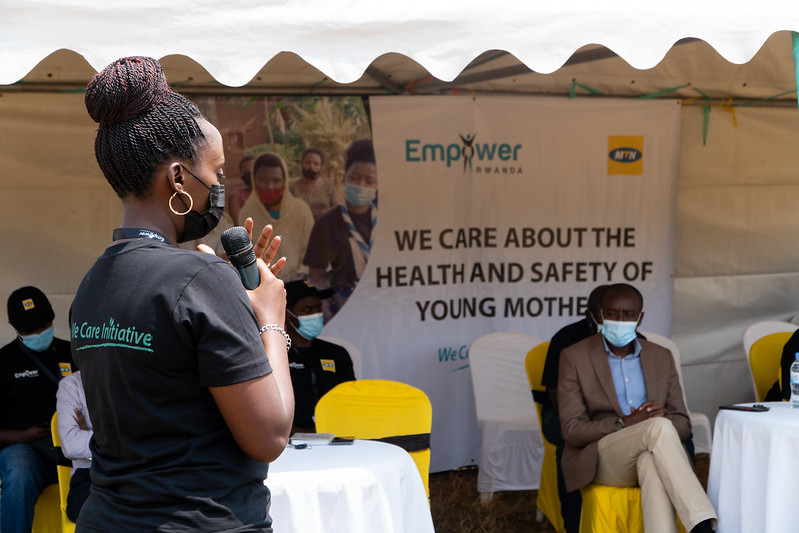 Teenage pregnancy is not a new phenomenon in Rwanda, it’s only in recent years that it has received attention from various actors. The study conducted by Haguruka in 2018 on the readiness of the community to address teenage pregnancy in Rwanda, indicated that the reaction to this phenomenon in the community has evolved from throwing the victim in the farthest island to accepting and caring for the newborn and the mothers. According to the Rwanda Demographic and Health Survey 2019-2020 – Key Indicators Report, the Eastern province registered high cases of child mothers.  Some of the over 900 cases of teen mothers recorded were from Rwamagana and Gatsibo districts. Empower Rwanda, since its inception in 2019 has been working with the vulnerable teen mothers in both districts to not only advance their rights but also empower them, improve their livelihood and give them an opportunity to return to school.

On 13th August 2021, Empower Rwanda partnered with MTN Rwanda (through their We Care Initiative) to support over 110 vulnerable teen mothers in Rwamagana and Gatsibo Districts. The support worth 10 million rwfs was through individual and group items such as sewing machines and accessories, setting up a tailoring center, livestock, and sanitary items among others. The support was meant to address the economic burdens related to raising their children, give them an opportunity to return to school, and ultimately improve their livelihood.

The support was handed over in ceremonies held at Munyaga and Murambi sectors in Rwamagana and Gastibo districts respectively and they convened over 150 people in total, including teen mothers, local leaders, MTN Rwanda, and Empower Rwanda representatives as well as the media.

In her introductory remarks, Olivia Promise Kabatesi, the Country Director of Empower Rwanda lauded MTN Rwanda for caring about the health and safety of the young mothers and for supporting them to regain a sense of hope for a better future. She reiterated the organization’s commitment to supporting especially the vulnerable teen mothers to overcome their dire challenges, help their children to thrive, and be able to return to school.

While addressing the participants, Alain Numa the Head of CSR & Corporate Communication  at MTN Rwanda lauding the local leaders for their continued dedication to addressing the issues among teen mothers. He noted that the support through the corporate social responsibility activity shows the company’s commitment to ensuring a happy, healthy, and prosperous client.

Rajab Mbonyumuvunyi, the Mayor of Rwamagana District commended MTN Rwanda and Empower Rwanda for their commitment to the noble cause of advancing girls’ and women’s rights. He called on the teen mothers to use the opportunity given to improve their welfare, to have hope for a good future, and to avoid second pregnancies.

Manzi Theogene, the Vice Mayor in charge of Finance and Economic Development of the Gatsibo district echoed the district’s commitment to work with various institutions to address the issue. He called on the supported teen mothers to use the opportunity to redeem themselves and make their lives and for their children better.

When the tailoring center was unveiled, and as the teen mothers received the livestock and sanitary items, they happily said that their dreams were valid once again. They pledged to use the support to make a difference in their lives, their children’s, fellow teen mothers in a similar trap, and their community in general.

Supporting and empowering vulnerable teen mothers is a collective responsibility. Empower Rwanda is committed to forming the supported teen mothers into saving groups for support and self-help initiatives to enable their self-reliance and to solicit more support for teen mothers from different actors; local leaders, private sector, faith-based organizations, and other like-minded CSOs. 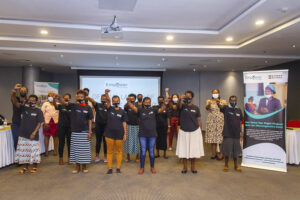 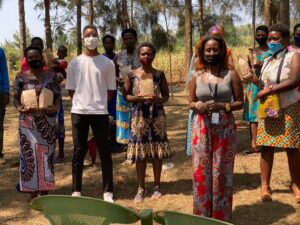 2020 in a nutshell: achievements, challenges, and way forward